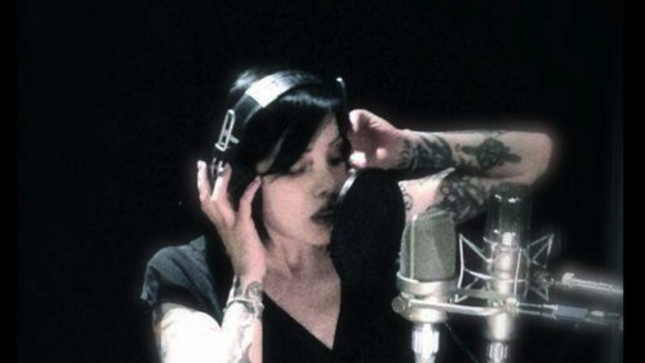 Canadian rocker, motivational speaker and cancer survivor Bif Naked recently spoke with Keith Ashley at The Examiner. An excerpt is available below:

Examiner: You’re looked at as a role model for females in rock and metal and with Canada producing a great new bunch of acts such as Sumo Cyco, Kill Matilda and even the returning to the road Kittie the future seems bright for female or female fronted bands. What advice would you give to any band or person starting off in music or just wanting to get a band together?

Bif: “There is nothing better than being a performer. It is an amazing life for anyone who has a desire to communicate through art whether that art is visual, music, dance, theater, or anything. If you are a female, in this world, regardless of the line of work you want to pursue, you had better get yourself a very good sense of humor. Otherwise, you will get pissed off. A LOT. When I was younger I was extremely defiant and easily offended, and I fought a lot. Now, I have discovered, that finding myself bemused by others’ (gender-based) mistreatment of me, and I do utilize this opportunity to strive and try harder. I still get in fights, just not as often or in the same way. I engage in compassion and feel pity for the ignorant and the cruel. THIS IS ESSENTIAL FOR THE FEMALE ROCKERS, to hold no grudges and be fearless. Just keep going. If a young or an aspiring female singer or band wants to perform and get their songs heard, they have to, simply, never stop playing. Ever. If you knock long enough and hard enough at the door, it WILL open. Trust me; I was on tour for ten years before I ever had a chance for a tour bus. That is a LOT of van tours (laughs).”

BraveWords scribe Carl Begai recently caught up Bif for an in-depth interview. They discussed Bif’s recent heart surgery, the tragic passing of her guitarist Jacen “JD” Ekstrom, her forthcoming rock album, and her still-in-the-works autobiography. An excerpt from the story is available below:

Music remains a huge part of Bif Naked’s life, with a new rock record currently in the works. It’s important to specify what she has up her sleeve in that Bif has taken to releasing music that suits her rather than label or (to some degree) fan expectation. In 2012 she put out Bif Naked: Acoustic Hits & Other Delights – featuring some unreleased pop material – and she closed 2014 with the release of the dance-pop single ‘Intellectual’ taken from her Jakkarta project with producer Jason Darr (ex-Neurosonic) in support of World AIDS Day. Bif’s only agenda is doing what she wants, when she wants.

“I was toying with the idea of doing a new rock record for a while. I was wondering if I should try to form a new band and become the Canadian Nightwish (laughs), but who cares? It’s all fun.”

“I finally figured out that when I become reflective and upset and writing about being pissed off or emancipation, it’s going to be rock music. I write pop songs with my friends because I can. We can write a death metal song or a country song, and whoever ends up being the producer will produce it differently than someone else. I’m working with Doug Fury again and with a guitarist Alley Cat from a band called Soma City Ward. He has a very distinctive guitar style and writing with him has been a lot of fun. And it’s been in a completely different direction. I mean, if we could form a death metal band in Morocco that’s what it would sound like (laughs). It’s psychotic.”

“I’m pretty sure we’ll tour for the album,” she continues. “It’s fun to tour with that stuff and it’s great to do these new heavy songs. With pop music I love being able to put out singles and see my friends look at me, scratch their heads and go ‘Really dude?’ And then there’s my boyfriend, who is a guitar player, going ‘Where’s the solo?’ (laughs). That’s all in fun. Doing the rock record, that’s serious business and that’s where the serious touring comes in.”