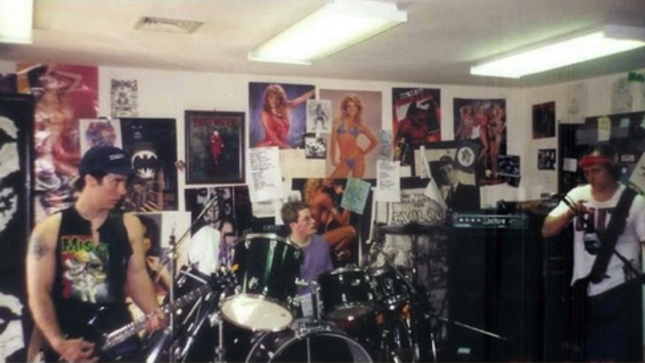 Author and musician Joel Gausten (The Undead/Pigface/Electric Frankenstein/Effectionhate) has written a special tribute to one of the heaviest albums of all time, The Misfits’ Earth A.D., on his official website. Inspired by the recent announcement that The Misfits will perform the infamous 1983 album in its entirety at the This Is Hardcore Fest at the Electric Factory in Philadelphia, PA on July 25th, Gausten shares a number of his personal experiences with the album, including meeting late cover artist Mad Marc Rude and sitting behind former Misfits drummer ROBO’s kit while jamming with Jerry Only and Doyle on the Earth A.D. track, “Death Comes Ripping.” An excerpt from the piece appears below:

“Listening to Earth A.D. in 2015 brings back some strong memories for me. I can still see Jerry Jr., then just a little kid, asking his dad how much longer he was going to be doing band stuff at the shop that day because he was bored and wanted to leave. Another time, I redeemed myself in the Earth A.D. realm when I was jamming with Jerry and Doyle and we kicked into ‘Death Comes Ripping’. I hit the tune with as much energy as I could muster, and I absolutely slayed that fucker. When it was over, Jerry said I played the song too fast and needed to slow it down next time! Yeah…there I was, playing ‘Death Comes Ripping’ on Robo’s drum kit and being told I played a song from Earth A.D. too fast. I consider that a major achievement to this day! (Unfortunately, I don’t think that particular moment was recorded. Damn…).

Above all, I remember Jerry putting in a lot of very long and hard days to get The Misfits going again. One minute, he was picking up boxes of t-shirts; the next minute, he was off to visit with Basil Gogos or Ed Repka to pick up artwork. After that, he’d head back to the shop, unload the stuff he picked up, handle a bunch of phone calls and then hit the practice/weight room to bang out a few songs before planning out more band-related stuff in the shop’s large conference room. I spent a lot of time at the shop in that era, and it wasn’t uncommon to see a typical Misfits-related workday for the guy start at 7:30am and end around 11pm. Jerry Only is the hardest-working, most professional musician I’ve ever known, and he’s earned every penny he’s made.”

In 1995, Gausten served as a fill-in rehearsal drummer for The Misfits while the group was auditioning new full-time members. He later served as a concert promoter or the band, booking and coordinating their “homecoming” show at Action Park in Vernon, NJ in August 1996. He chronicled these and other events in his out-of-print 2006 mini-book, Tales Of Horror: The History of The Misfits & The Undead. A sample of the book can be read at this location.