According to a since-removed listing on the Nuclear Blast web site, AS I LAY DYING will release its new album, “Shaped By Fire”, on September 20 via the German heavy metal record label.

AS I LAY DYING‘s upcoming disc will be the band’s first since singer Tim Lambesis was sentenced to six years in jail after pleading guilty to paying a San Diego police officer posing as a hitman $1,000 to kill his wife. Approximately two and a half years later — in December 2016 — he was discharged from a California detention facility and was transferred to the Division of Adult Parole Operations.

In June 2018, AS I LAY DYING played its first show with Lambesis in five years and released a new single, “My Own Grave”. Lambesis also owned up to his crimes in a long apology on the band’s Facebook page after his release.

November saw AS I LAY DYING complete its first U.S. tour in five years and the band followed it up with a European run of shows. Another single, “Redefined”, arrived in April.

The return of AS I LAY DYING raised some questions, particularly since guitarist Nick Hipa categorically denounced the band’s disgraced frontman as a “sociopathic narcissist in definite need of rehabilitation” in a social-media post back in 2014.

Earlier this week, AS I LAY DYING announced that it will embark on the “Shaped By Fire” U.S. headlining tour in the fall. Support on the trek will come from AFTER THE BURIAL and EMMURE. 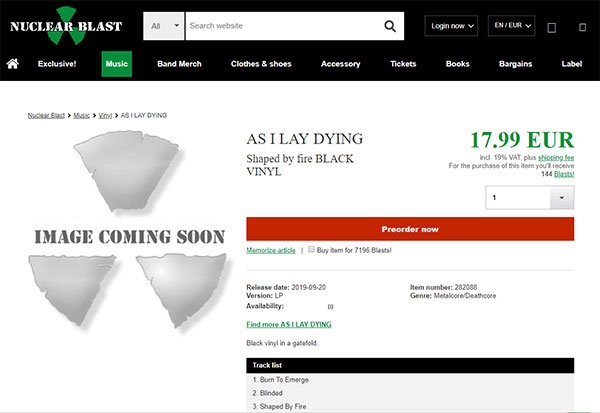