ART OF ANARCHY, the band featuring CREED singer Scott Stapp alongside DISTURBED bassist John Moyer and ex-GUNS N’ ROSES guitarist Ron “Bumblefoot” Thal, will make its live debut on Thursday, October 27 at the Gramercy Theatre in New York City. The group will perform all brand new songs, including the first single, “The Madness”, which will be serviced to Active Rock Radio in a few weeks.

A teaser for the official video for the track is available below.

Says Stapp: “I was approached by the ART OF ANARCHY guys and asked to join them last year.

“This project has been a very cool, unique experience for me.

“I’m proud of our work and made some great friendships along the way.

“It’s been great collaborating with artists from different backgrounds and you can definitely hear it in the music.

“We’re kicking this off with our debut performance in New York City at the Gramercy Theatre.

“I love performing and connecting with the fans, and I’m really excited for what’s ahead.”

Adds Thal: “We’ve got great chemistry together, and the songwriting process has been so natural and seamless. Now you’ll get to see it and hear it at our debut performance in New York City on October 27, where we’ll do a VIP meet-and-greet and play some of our new material that will be on our debut album on Another Century Records early next year.

“It’s exciting to get out there to perform together; it’s never felt more right than it does now.

“We’re creating something special that we can’t wait to share with the world.

“Come on out and be a part of this with us. It’ll be a night to remember.”

States Moyer: “The individual personalities of the musicians on this record have come together to create a uniquely powerful album of songs that we feel will have a strong message and emotional connection with fans.

“After working on this record for over a year, we can’t wait to hit the stage and play these songs live.”

Stapp went through a highly publicized, drug-enhanced meltdown in 2014, after which he entered into an intensive rehab program and was diagnosed with bipolar disorder. Stapp is now sober and in intensive therapy, although he recently began touring as a solo artist again.

ART OF ANARCHY is the brainchild of Thal and Jon (guitar) and Vince Votta (drums), who have been friends for 19 years dating back to their days on the New York music scene.

Thal joined GUNS N’ ROSES in 2006 and stayed in the band for eight years, playing on the 2008 album “Chinese Democracy”. He has also released a number of solo CDs.

Moyer has been DISTURBED‘s bassist since 2004. 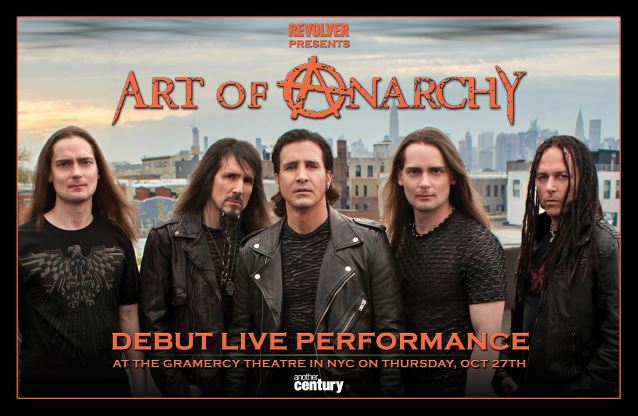