An “unboxing” video for ARCH ENEMY‘s new live DVD, “As The Stages Burn!”, can be seen below. Released on March 31 via Century Media, the set contains video footage of the band’s largest stage production to date from their performance last summer at the Wacken Open Air festival in Wacken, Germany. This performance marks the pinnacle of a highly successful album campaign in support of “War Eternal”. It all began in March of 2014 when the band announced new vocalist Alissa White-Gluz as well as the video for the album title track, “War Eternal”. This debut track went on to become the bands most successful video in their career, surpassing 20 million views on YouTube. The release of the “War Eternal” album also saw ARCH ENEMY reaching their highest U.S. and German chart positions to date while going on to play over 200 shows in over 40 countries around the world. In late 2014, Jeff Loomis (ex-NEVERMORE) joined ARCH ENEMY during the world tour with KREATOR and in 2015 they played arenas as direct support for NIGHTWISH.

ARCH ENEMY guitarist Michael Amott told Spark TV about “As The Stages Burn!”: “I think this is the perfect album cycle to document. It’s a fresh new ARCH ENEMY, and we just spent two years on the road or more, and, yeah, we just wanna put it out there kind of as a document of this time. And the show at Wacken was really special as well. We put a lot of effort into the production and had our biggest show to date. And that’ll be the main part of the DVD, I guess, but there’s gonna be a lot of other stuff as well, and it’ll be like a live album, DVD, Blu-ray and all that stuff. We have a lot of other cool shows filmed as well, and parts of those might very well be a part of the DVD. But, you know, Wacken was just a great opportunity; it’s the biggest heavy metal festival in the world.”

ARCH ENEMY will celebrate the release of “As The Stages Burn!” with a number of European shows with special support from LACUNA COIL and THE HAUNTED.

ARCH ENEMY is currently recording its new album for a tentative September 2017 release. Michael stated about the musical direction of the new ARCH ENEMY material: “It’s very diverse, I think, the material. It’s got a lot of trademark ARCH ENEMY elements, I guess. I can think a song is really, really different, but then we’re gonna play it, it’s gonna be us playing it, Alissa [White-Gluz] singing, it’s gonna sound very, very ARCH ENEMY. So it’s not like a huge departure, but it’s definitely the next… I think we’re more relaxed, maybe, than on the last album… ‘Cause Alissa‘s been with us for three years, and it’s not as tense, maybe, as it was the last time around. [Before we released ‘War Eternal’] we were, like, ‘We don’t even know if people are gonna like this, if people are gonna accept us, ARCH ENEMY, with a new singer.’ We didn’t really know, which made the songs maybe more… To me, ‘War Eternal’ has a very kind of dark and very angry and claustrophobic feel to it, which is really cool. But I think the new one is gonna be more open and probably more powerful, actually.”

Michael also confirmed that ARCH ENEMY‘s new guitarist, Jeff Loomis (ex-NEVERMORE), has not contributed to the songwriting on the band’s new disc but “he’s gonna be playing on the album, of course.” 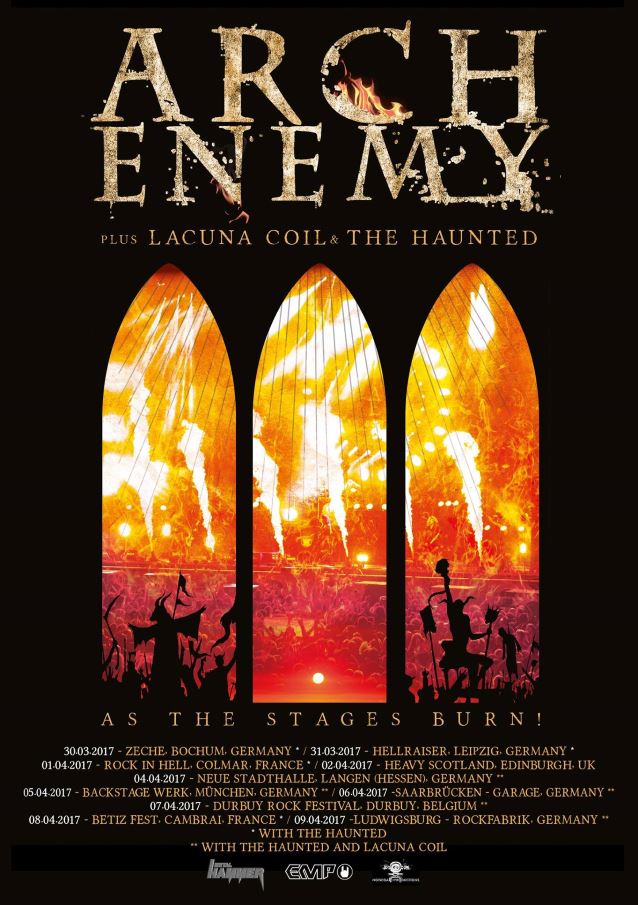