DJ Cy of “Le Tour Du Metal” conducted an interview with bassist Ted Lundström of Swedish death metallers AMON AMARTH prior to the band’s November 13, 2016 show at Transbordeur in Lyon, France. You can watch the full chat below. A few excerpts follow (transcribed by BLABBERMOUTH.NET).

On the band’s European stage setup:

Ted: “We have a huge Viking helmet that’s the drum riser. It’s maybe not historically correct, but I think that’s what people want to see. It’s going to be more fantasy stuff, we have a lot of ramps, stairs, and we got a dragon, or a Middle-Earth serpent who comes up during the show, which is inflatable. Some of the shows have pyro, depending on where we are. They’re only for certain, special shows. It’s a huge production for us.”

On the number of trucks needed to transport the band’s gear:

Ted: “Two trucks. One big, and a small truck for some other parts. It’s a pretty big production for a death metal band, for sure.”

On the importance of the band’s stage presentation:

Ted: “For us, it’s pretty important. In our opinion, it’s not only the music, we’re trying to build a whole universe with lyrics, the artwork, the backdrops, everything is important for us. We try to make a full show, not only music. If you come to a show, you’re going to go home with a lot of impressions.”

On how he feels about the band’s new “Jomsviking” album several months after its release:

Ted: “We’re super-happy with the album. It’s our first concept album based on a whole story that our singer [Johan Hegg] wrote. We’re not really sure when we wrote and recorded the album how it would turn out, but we were really happy with the results. You can see it with the reviews and the fans at the shows, the response has been amazing. We’re super-happy.”

Ted: “We did the previous album [2013’s ‘Deceiver Of The Gods’] with him, that was our first. We had a good experience. He’s a really cool guy and we felt really relaxed to record there. We do it out in the English countryside where his studio is in the middle of nowhere. It’s very relaxing. You can focus 100% on the album. We just wanted to try it one more time and see for the second time how his studio would be. It felt good. We were happy with the first results, so why not go back?”

On German metal queen Doro Pesch‘s guest appearance on “Jomsviking” track “A Dream That Cannot Be”:

Ted: “We had this song that we wanted to do a duet because it fit the lyrics of the song. We started to come up with different names of people we wanted to work with and she was the top name on our list. We were thinking about maybe having some of those ‘modern’ metal female vocalists, but most of them are too much death metal [sounding] like ARCH ENEMY, or too opera/symphonic. We wanted have a more ‘heavy metal’ feeling. We wanted to have something in between. We met her before a couple of times and decided to ask her and she agreed. She came to the studio and she was there for a couple of days. It was fun.”

On why AMON AMARTH didn’t hire Tobias Gustafsson [VOMITORY, CUT UP] full-time after he recorded drums on “Jomsviking”:

Ted: “First of all, we needed a guy for the album to write and also record the album. So we contacted Tobias because he’s an old friend of ours and we like him a lot. We asked him if he wanted to join us and write and record the album. He said he could do that, but then we needed a touring or permanent member…it was possible we thought maybe if Tobias thought it could work, we could do it, but all the circumstances about touring life and all that, it’s a lot of factors that had fall into pieces. Then Tobias actually, he was the one who recommended Jocke [Wallgren, ex-OCTOBER TIDE and VALKYRJA] as a drummer because he knew we were looking for a guy. He said, ‘This guy might be the right choice for you guys.'”

On what Wallgren brings to the band:

Ted: “He’s a super-solid drummer. Very professional, very on-the-spot all the time. He’s a fantastic drummer. It gives us more stability because he plays perfect all the time. Now we have to step it up. [Laughs] It much easier to play if you have a drummer who is [tight]. It makes our lives easier.”

Ted: “It’s tricky to describe in words. It’s a normal progression. We’ve been lucky to have the same lineup for a very long time. We had a couple of lineup changes, but we’ve had a very solid lineup. We always had the same vision, like where we wanted to go and how far we’re willing to take this, how much work we want to put into this. We’ve just been working and doing the stuff we like to do. Luckily, it’s been what the fans have wanted to see, too.”

On performing in front of sold-out crowds:

Ted: “It is way beyond. Starting out as a death metal band, the shows when we started the band, they were only hundreds of people at these shows and they were local. We were happy for any show we could get. When we got a record deal, that was a big thing, ‘Wow, we got a record deal!’ That was almost impossible, too. Once you reach a new goal, you set up another goal. Now, we have these great shows, but we’re looking even further to see where we can go.”

On the band’s new goals:

Ted: “I don’t know…there’s a huge world out there. We can play bigger shows, do better albums, and maybe, as I said, we’re trying to do wider music, but to spread, do it bigger. I would love to do a soundtrack for a game, or a movie, for example. Johan, our singer, has already starred in a movie, ‘Northmen [A Viking Saga]’. That might have been the place he got the inspiration for the story of the new album.”

“Jomsviking” debuted at No. 19 on The Billboard 200, having shifted 21,000 equivalent album units in the week ending March 31, 2016. The disc was released on March 25, 2016 via Metal Blade in North America and Sony Music internationally. The first concept record in AMON AMARTH‘s storied career tells a tragic tale of love and revenge, backed by the Swedes’ trademark melodic, anthemic metal, which was produced and mixed once again by Andy Sneap (MEGADETH, TESTAMENT, ACCEPT). The epic original story is set in the world of the Jomsvikings, the legendary order of mercenary Vikings. 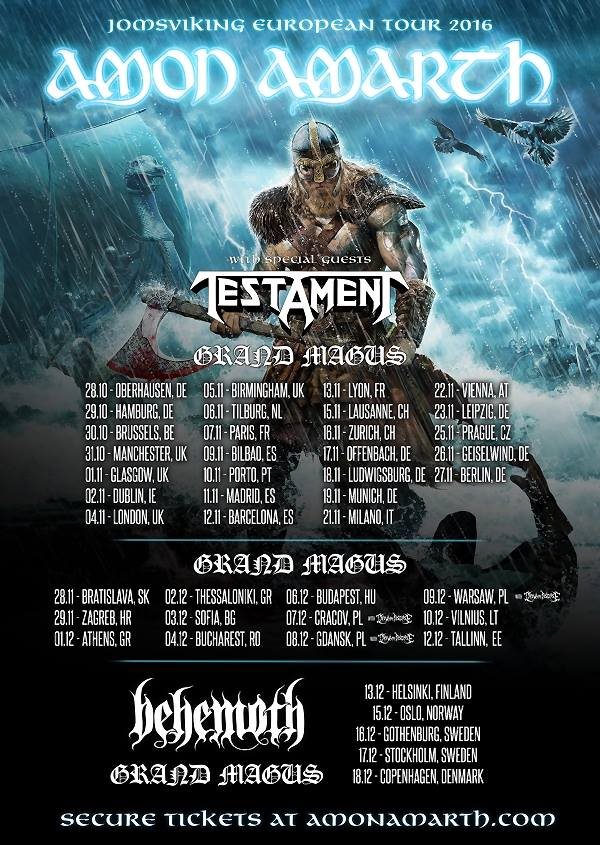