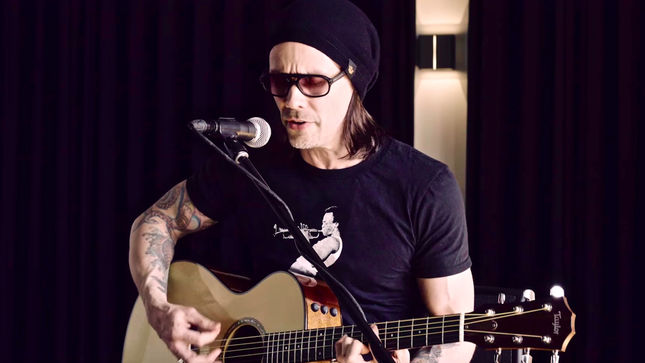 In the new video below, guitarist and singer Myles Kennedy from the American rock band Alter Bridge plays the song “Before Tomorrow Comes” from their second album Blackbird. This session was recorded in Amsterdam on September 7th.

Kennedy performed an acoustic version of the band’s song “Watch Over You” on September 6th at Bandit Rock radio in Stockholm, Sweden. Check out video of the performance below:

Alter Bridge has always worked to outdo their previous efforts in every aspect of their career. The same holds true for the newest video for their debut single “Show Me A Leader” that was recently released.

The video is based on a concept created by Alter Bridge and director Zev Deans that brings life to the story told in the single’s lyrics. The animated video shows the world in turmoil as politicians (represented by suits with megaphone heads) are broadcasting harmful messages to the public. The band is on a roof with a satellite dish performing “Show Me A Leader” to counteract the harmful messages being spread. The video is visually captivating and showcases Deans’ talent and unique creative style,  something the band was immediately drawn to.

“Show Me A Leader” is the debut single from Alter Bridge’s fifth studio album, The Last Hero. The album is scheduled for worldwide release on October 7th by Caroline Records in the United States/Canada and Napalm Records throughout the rest of the globe. In the US, the song has been moving up the Active Rock charts being a Greatest Gainer this week via Mediabase and was Top 5 Most Added when it was released last week. The single is currently #27 on the Active Rock Chart this week. “Show Me A Leader” is also streaming on Spotify.

The Last Hero is now available for pre-order via iTunes, Amazon (widget below) and Google Play. Fans who order the album will receive an instant download of the debut single “Show Me A Leader”.

The album will be available in various fan bundles at Alterbridge.com/store and fans can get exclusive early access to the band’s ticket pre-sale by pre-ordering any item in the store. A lyric video for “Show Me A Leader” is streaming below. 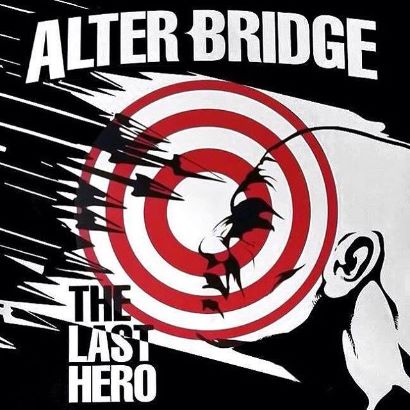 “Show Me A Leader” lyric video:

Alter Bridge performing select US headline dates in support of The Last Hero this month.

Alter Bridge have announced their long-anticipated return to Europe. Their biggest headline shows yet, the 24-date tour treks 15 countries and kicks off on November 4th.

Special guests include Danish rockers Volbeat, who just released their sixth album, Seal The Deal & Let’s Boogie. French metal group, Gojira, will be giving fans a taste of their crushing new album, Magma, and up-and-comers, Like A Storm, jet in from New Zealand to get the party started. 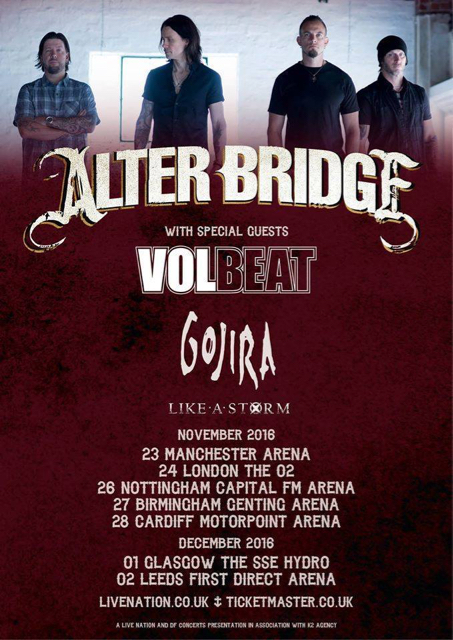