ALICE IN CHAINS has announced an extensive European tour for May and June 2019. Starting on May 23 in Glasgow, the 14-date trek includes three U.K. shows, with a date at Birmingham’s Barclaycard Arena on May 24 and Wembley The SSE Arena on May 25. These will be the biggest headline shows the band have played to date in the U.K. Following these U.K. shows, the band head to Europe for a run of major headline dates and festivals, including Rock Am Ring and Rock Im Park in June. The band will be joined by special guests BLACK REBEL MOTORCYCLE CLUB, on the shows marked with * below.

Last week, ALICE IN CHAINS released the official video for its song “Never Fade”. The track is taken from the band’s sixth studio album, “Rainier Fog”, which arrived in August. The clip was directed by Adam Mason, who previously helmed ALICE IN CHAINS‘ video for “The One You Know”.

The band’s first new studio effort in five years, “Rainier Fog” marks a few firsts for ALICE IN CHAINS: it’s their first album for BMG and their first time recording in their hometown of Seattle in more than 20 years (worth noting that the album title is a tribute to Seattle). The “Rainier Fog” recording process also saw the band spend time at Henson Recording Studios in Los Angeles and at the Nashville studio of producer Nick Raskulinecz. “Rainier Fog” is the third straight ALICE IN CHAINS album recorded with Raskulinecz and engineer Paul Figueroa. The album was mixed by Joe Barresi (QUEENS OF THE STONE AGE, TOOL). 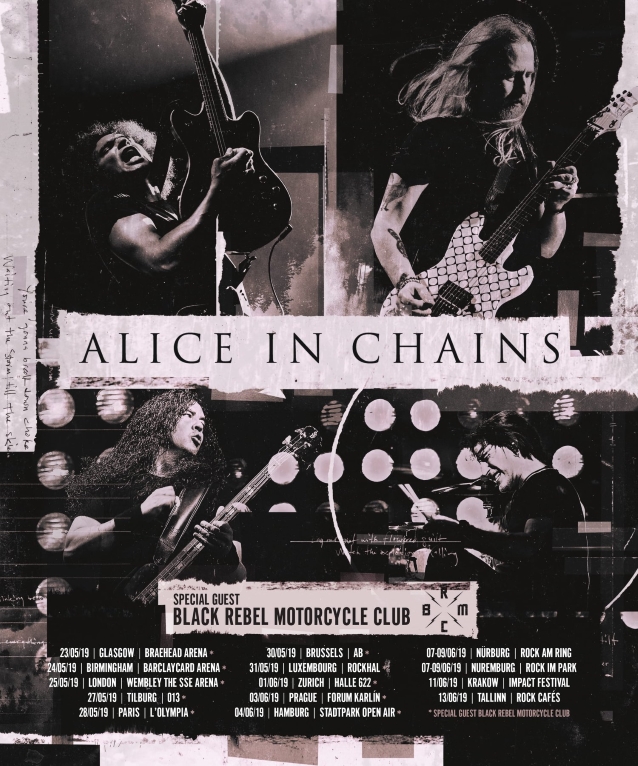