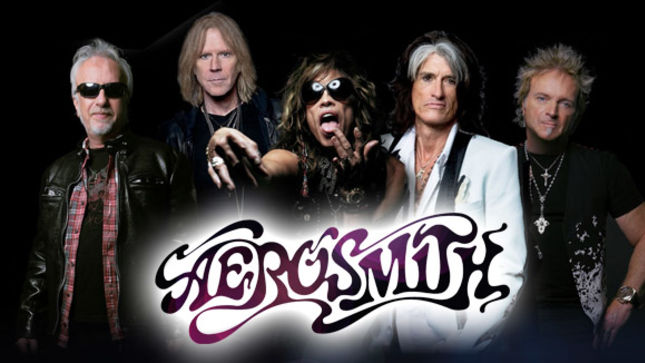 Aerosmith have updated their tour schedule with two Canadian dates in July. The new dates are July 13th at Prospera Place in Kelowna, BC, and July 16th at Save on Foods Memorial Centre in Victoria, BC.

Ticket and VIP package pre-sales begin February 11th. Aero Force One members may access their unique pre-sale code by logging in to their fan club account. Become a member today at AF1 to access pre-sale tickets, VIP packages, or a combination of both!

On June 15th, 2014, Aerosmith took the Download Festival in Donington Park, England by storm with an unforgettable performance. Re-live this legendary concert on the big screen when Aerosmith Rocks Donington 2014 comes to movie theaters across the US on Thursday, February 26th. A new trailer can be found below. 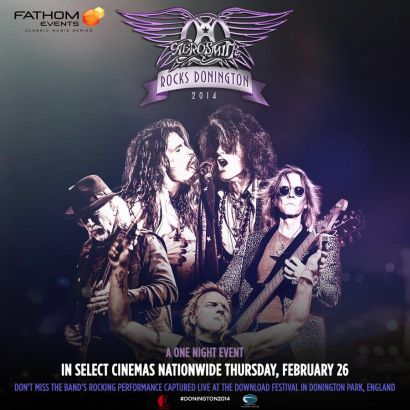 “It’s always an absolute hoot that leaves me howling at the moon, performing at Donington we couldn’t have had a better time on stage that night,” says Steven Tyler. “I could feel the vibes of all the greats pulsing through the stage like AC DC, Rage Against the Machine, Metallica and so many more.”

“We have played Donington many times but this performance was one of our best,” said Joe Perry. “Thanks to our fans who were there who helped us make it a night to remember. We are proud to have it be part of this theatrical series and it will give our fans who weren’t there around the world a chance to relive an ass kicking night of rock and roll.”

“We’re really proud and grateful to have been chosen to headline the Download festival at Donington for 2014,” Tom Hamilton says. “It was an awesome experience and I think this film captures it. Special thanks to the insane fans who stuck with us through mud and rain.”

“Aerosmith are rock legends and I am very proud Cinema 1 is a part of bringing this incredible band’s live concert performance to theaters across America,” said Ray Carolin, CEO of Cinema 1. “I am certain their fans are going to be blown away when they experience Aerosmith Rocks Donington 2014.”

The first in the Fathom Events Classic Music Series, this one-night concert event features performances of some of Aerosmith’s classic hits like “Livin’ On The Edge”, “Last Child”, “Walk This Way”, and more. Don’t miss your chance to relive this remarkable performance and enjoy the legendary band Aerosmith on the big screen.

Get tickets at this location.