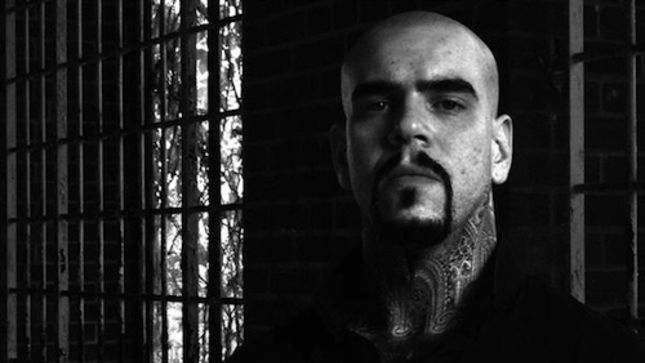 Since Sheik ‘N’ Beik Art Collective met world-renowned surrealist Vincent Castiglia seven years ago, he has been developing a body of work with what some would consider an “unconventional” technique. The entire collection of his paintings was created exclusively in his own human blood. He believes that this singularly personal medium contains his own psychic energy, while working with it gives it an outlet and form. In doing so, he dissolves the barrier between art and artist in a most literal and immediate sense.

In the wake of Vincent’s 33rd birthday, the age of the Christ’s crucifixion and resurrection, Archetypes, has been curated by Julio Santo Domingo, Roger de Cabrol, and Benjamin Larretche from the Sheik ‘N’ Beik Art Collective, to showcase the relative themes of death and rebirth in Vincent’s work. The exhibition opening will mark the launch of Castiglia’s official partnership and collaboration with the Sheik ‘N’ Beik Collective. 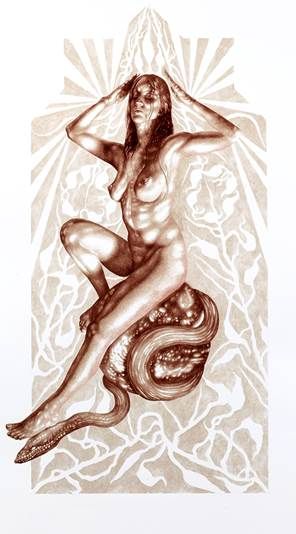 Vincent’s paintings are monochromatic tableaux examining life, death, and the human condition. While many surrealists cite fantasy or dream as their inspiration, Castiglia’s canvases are connected to a life story, which is highly allegorical. Vincent’s paintings have been exhibited at msueums and galleries in the US, and internationally. He is the first American artist to receive a solo exhibition invitation from Oscar Award-winning artist H.R. Giger to exhibit in the H.R. Giger Museum Gallery. A native New Yorker, Vincent continues to live and work in the City.

The Archetypes exhibition will consist of 19 works; 18 original paintings as well as one sculptural work, spanning 10 years, as well as several paintings never before exhibited all done using his own blood. The exhibition title describes the various archetypal figures depicted throughout the body of paintings, representing various stations of human experience. Vincent Castiglia’s exhibit will run from April 16th until April 30th, 2015.

Sheik ‘N’ Beik was born on the foundation of experimenting and challenging the senses. As our growth cycle continues and we reach higher levels of consciousness, we also act as a biosphere offering a nurturing habitat where our engineers are free to bask under the dome of our mind-expanding journey.

Located in the heart of New York’s East Village, the Dorian Grey Gallery is the source for the most authentic works of art connected to the history New York City. The gallery is a collaborative venture with veteran New York gallerists Christopher Pusey and Luis Accorsi. With a keen eye focused on street art / graffiti and the New York emerging art scene, Dorian Grey Gallery continues to be the premier source for “authentic” NYC art.

Castiglia is working with award-winning Filmmaker John Borowski on an official biopic on Vincent’s work and life, Bloodlines: The Art And Life Of Vincent Castiglia, but needs the assistance of his international fan base in order to support this Kickstarter campaign to make the production possible, and the very best that it can be. Every film project has its own unique challenges and this film is no different. The goal is to continue production in 2015 and complete the film in 2016. 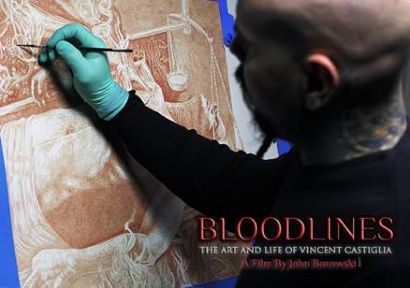 Bloodlines: The Art And Life Of Vincent Castiglia is produced and directed by award-winning filmmaker John Borowski. The film focuses on artist Vincent Castiglia’s inspirations and personal experiences. His work is singularly unique. For over a decade, he has painted exclusively in his own blood. Recently, there have been many requests for his highly specialized paintings to be created for his collectors using their blood, so he has begun working on select projects (chronicled in the film).

The film also examines Castiglia’s troubled past and his overcoming the odds to become a world-renowned, critically acclaimed artist. He’s had the distinction of receiving his first solo exhibition by personal invitation from the late master, H.R. Giger. The exhibition hung for six months in the Giger Museum Gallery in Switzerland. Featured in the film, for the first time ever, is the in-depth process by which Castiglia creates his artwork painted in human blood. Interviews with a wide range of collectors who own his work will also be featured.

The funding being sought for the production of the film includes in-person interviews with collectors of Vincent Castiglia’s work across the US and throughout Europe. The funding will also be going toward several trips to New York City to interview Castiglia in his studio, as well as post-production costs and perk-fulfilment costs.

The idea to produce Bloodlines: The Art And Life Of Vincent Castiglia came about when Vincent Castiglia posted an online survey asking for feedback regarding whether or not a reality show on his work was of interest to his followers, to which John Borowski replied: “You deserve better than a reality show that is sensational for a short time period but forgotten in the long run. You deserve a feature documentary film highlighting your life and the reasons behind why you create your art. A film will stand the test of time.” Being very familiar with Borowski’s work, he entrusted John to create a film about his life and works of art.

For the film’s musical score, Borowski looks forward to working again with long-time collaborator DC McAuliffe, who has scored four other films by Borowski.

Visually arresting and creatively daring, this documentary captures the life and times of a truly rare American artist who utilizes his own life blood to create surreal works of art. Through the assistance of fans and friends, Vincent Castiglia looks forward to making this project a reality.

For more information on Vincent Castiglia, visit this location.